Cuba used to have one of the most well developed railway networks in Latin America. By most accounts, the system is currently dilapidated, due to old infrastructure and decades of neglect. Many of the trains still run, but delays and breakdowns are frequent. As a mode of transportation,  the rail option is rather poor. But in terms of nostalgia and fun, it can be quite the trip.

Although there are several train routes in Cuba, I will only give you a quick breakdown of the one located closest to Havana. This is the most popular one used by foreigners, although most of the travelers are Cuban. The Hershey train is an electric rail-car which departs 3 times per day from the Casablanca station, on the eastern shore of the Havana harbor, and travels all the way to the city of Matanzas, located about 100 km east of Havana. In between, the train makes dozens of short stops and, in many cases, will let you off on demand, anywhere along the route, if conditions permit.

Getting To The Casablanca Train Station

The Casablanca station is located outside of the city of Havana, on the other side of the Bay of Havana. You can get to the station by taxi, but the cheapest and shortest option is to take the Casablanca ferry. This is a ferry which departs from the Regla ferry terminal (as mentioned in the Havana Suburbs section of the Real Havana Guidebook) located at the corner of San Pedro and Santa Clara in Old Havana. When you arrive at the ferry station, make sure to inquire if the next ferry is traveling to Regla or Casablanca. You want to get on the one going to Casablanca. The ferry ride only costs 1 peso (MN).

Once you are at the Casablanca landing, you will see the Casablanca train terminal just to the west. It’s a very small terminal, looking more like a tram stop. The overhead electric wires will indicate exactly where it is.

Price To Take The Hershey Train

The price to use the Hershey train depends on how far you want to go. The main stop between Havana and Matanzas is located in the miniscule town of Hershey (renamed to Camilo Cienfuegos). It is at the halfway point between the two cities. Travel up to this stop costs 1.40 CUC for foreigners. Travel all the way to Matanzas costs a total of 2.80 CUC. Most foreigners who simply want to take the train for the nostalgic experience will simply take the first leg of the trip, getting off at the town of Hershey for a quick exploration, and to wait for the return train to bring them back to Havana. It’s important to note that about 1 km north of the town of Hershey, there is the larger, coastal town of Santa Cruz del Norte. It’s easy to walk to and interesting to explore, and you are almost sure to be the only foreigner there. 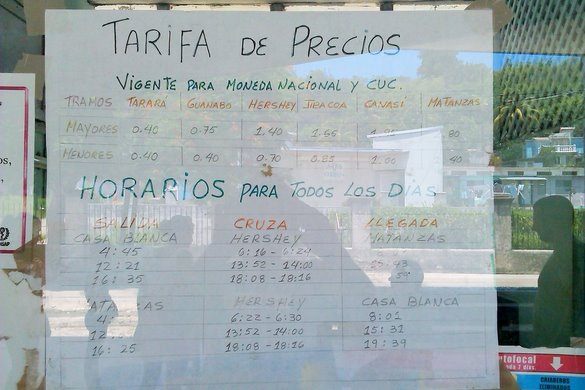 In order to get back to Havana, simply go back to the station, pay the fare, and take the next train.

The train schedule is listed below, but note that it can change without notice, mostly due to equipment failures. On some days, when there are electrical problems, the train doesn’t operate at all. 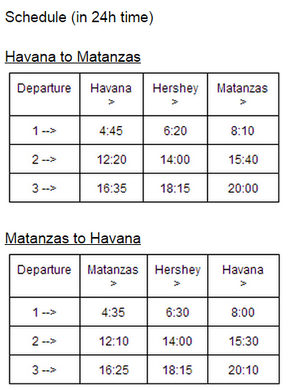